A balanced nutrient supply from the soil is the foundation to help large populations avoid nutrient deficiency related health problems.

Crops are the first step in the food chain. Soils which are lacking important nutrients, grow plants with the same deficiencies. This can lead to nutrient deficiency related disorders in people.

By adding specific minerals to the fertilizer, the soil can regain a healthy balance of nutrients.

Let us take zinc for example: 50 percent of the world's soils are marginal or deficient in this important micronutrient.

In humans, zinc is used to activate the growth and development of bones and major organs, and to enable brain functions such as memory, sensory messaging and cognition.

How to avoid zinc deficiencies

Around 800 000 people die from zinc-related deficiencies (1) each year. Often this happens to people who do not have access to foods that are naturally rich in zinc, such as fish, poultry, meat and dairy. Instead, they live on a cereal-based diet.

Children are particularly at risk, as zinc deficiency can cause chronic diarrhea, which may be deadly.

Since the 1980s, adding zinc to fertilizers has been a very successful way to ensure people get enough zinc into their bodies. The fertilizer can be applied either through the soil or on to the plants' leaves.

Adding zinc to fertilizer in Turkey

One of the first countries to implement this was Turkey. The successful programme caused the use of zinc-fortified fertilizers in the country to rocket from nothing in 1995 to almost 500 000 tonnes per year in 2012.

According to a paper by lead scientist Ismail Cakmak (2), the project was hailed by the International Fertilizer Association as “one of the world's first examples of using agricultural practices to address public health problems as well as improved crop production, and its success provides a model for countless other nations”.

Zinc deficiencies are still inadequately addressed in many countries, and many have a long way to go to reach the success achieved in Turkey.

Zinc is also important to plant health. If the soil does not contain enough zinc, the plants will be stunted in growth and have lower yields.

A trial in seven countries over a two-year period has shown that grain yield increased with 5.1 percent after zinc was applied to the fertilizer.

Breeding crop varieties that are more efficient in taking up zinc from the soil, can partially address the problem in only slightly zinc deficient soils. Zinc is not the only micronutrient that has been used to enrich nitrogen and NPK fertilizers in target areas.

Worldwide, one billion people are estimated to be impacted by selenium deficiencies in the food.

Too little selenium can cause infertility, muscle weakness, mental fog, fatigue and a weakened immune system in humans. Selenium deficiency can also be found in many grazing animals.

Finland is one of the countries that has had great success in improving its population's health by adding selenium to the soil through the fertilizer.

Since the program began, the number of people with selenium deficiencies in Finland has decreased sharply.

In the 2000s we saw that intake was 80 micrograms of selenium per day. That is about twice what it was before selenium was added to the fertilizer.

As more countries address malnutrition, the health of the world's population is improving. Providing more farmers around the world with access to mineral fertilizers and knowledge in crop nutrition is one way we can continue to increase the supply of nutritious and healthy food. 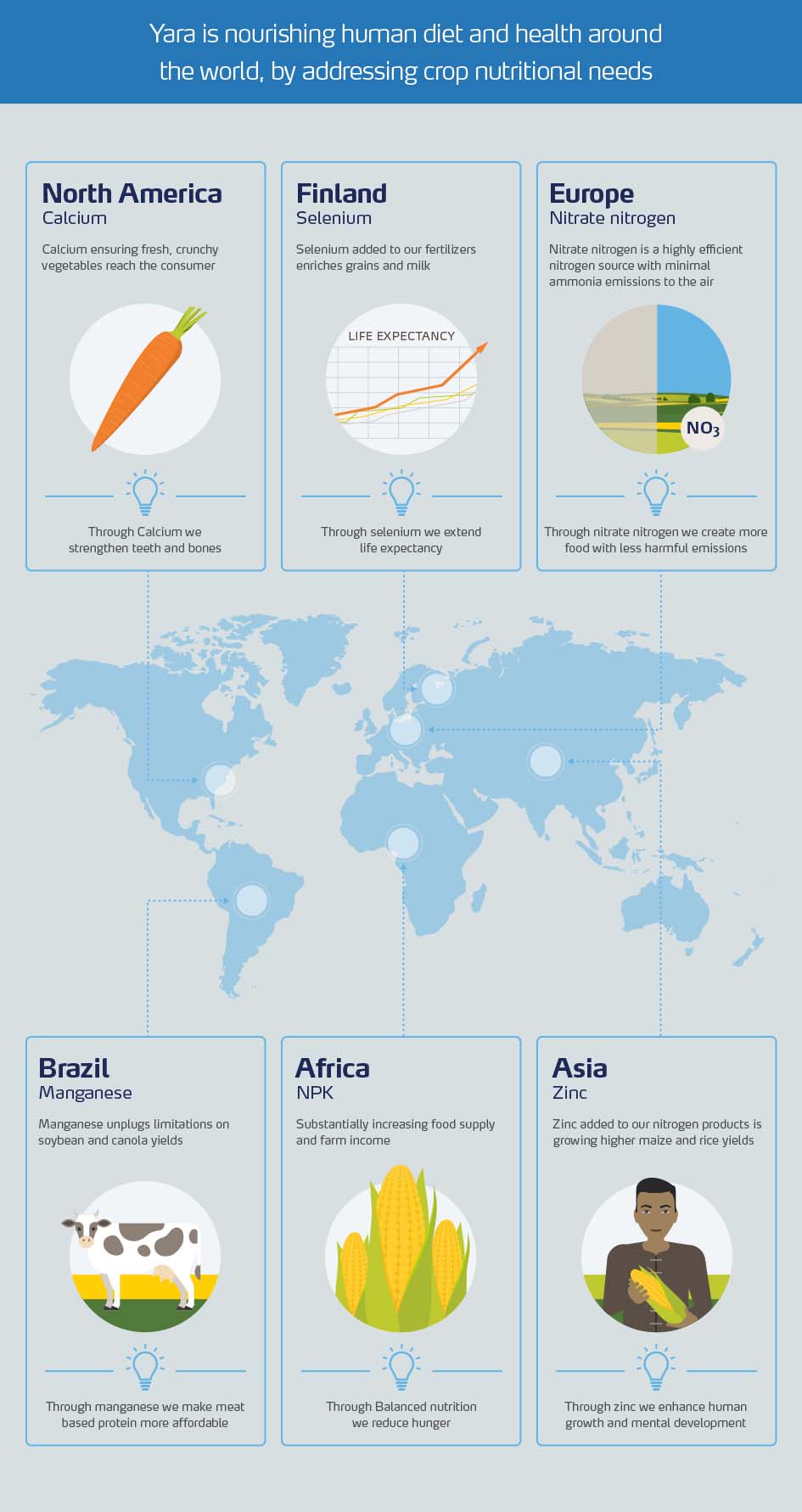